Special Screening of "May It Last: A Portrait of the Avett Brothers" at the Gem Theatre on September 12 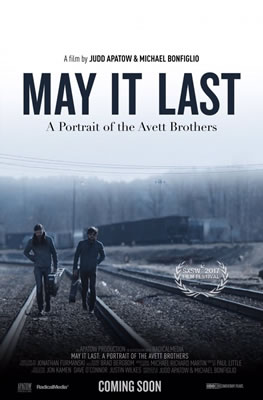 The Gem Theatre will be showing the the SXSW award-winning documentary, MAY IT LAST: A PORTRAIT OF THE AVETT BROTHERS co-directed by Judd Apatow and Michael Bonfiglio (ESPN's 30 For 30), on Tuesday, September 12, 2017. Stay tuned for showtimes and to pre-order tickets.

With the help of Oscilloscope and over two years in the making, MAY IT LAST is an intimate, behind-the-scenes look at one of today's most popular bands as they collaborate on their hit 2016 album "True Sadness." Buttressed by incredible live performances, Apatow and Bonfiglio's camera captures deeply personal and revealing moments between the band.

With roots in bluegrass, folk and rock-and-roll, the North Carolina-based Avett Brothers – fronted by Seth and Scott Avett – are one of today's most popular indie bands with nearly 1.4 million monthly listeners on Spotify and constant top-selling albums. They routinely sell-out not just concert halls, but entire stadiums, playing to crowds of up to 40,000 people and catering to a wide swath of audiences (following up an NFL halftime show with a performance at Tanglewood, for example).

The Gem Theatre is thrilled to bring this film to the Cabarrus County native's community.