The Gem Kicks Off its 80th Anniversary Celebration 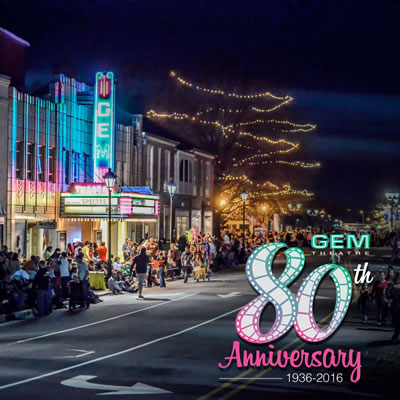 In 80 days, the Gem Theatre will reach a huge milestone – its 80th Anniversary.  To celebrate, we have a great special that you don’t want to miss.

From Thursday, October 13th through Sunday, October 16th, you can get a small drink, small popcorn and a box of candy for only 80 cents each.  That means you’ll be able to enjoy a movie and concessions for $7.40 or less!

History of the Gem

Since opening its doors on December 31, 1936, the Gem has served as a landmark place to watch movies as a family.  It was built by Cannon Mills Company and was originally under the management of the Cannon Memorial YMCA.  The first movie to show at the Gem was “Can This Be Dixie” starring Jane Withers.

A few years after opening, in 1942, the Gem was gutted by a fire and the theatre was reduced to ashes.  It wasn’t until six years later that the Gem was rebuilt and it featured a beautiful lobby, 916 seats and a balcony.  It has been open ever since and is the longest standing Art Deco building in Cabarrus County as well as the oldest single-screen theatre in continuous operation in the U.S.  The Gem is also one of only a few movie theatres to offer balcony seating.

Click here to read more about the Gem’s history.