Eric Church Breaks Into Own Hall of Fame Induction 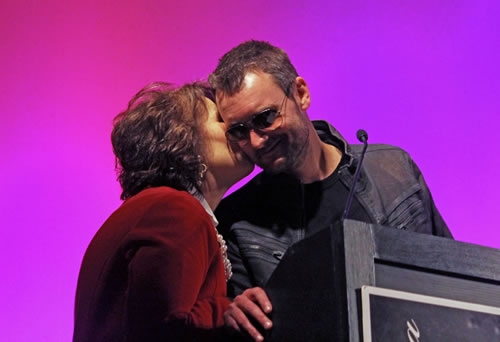 After wrapping earlier than expected at a private event in his home state, Eric found himself only an hour and a half away from the North Carolina Music Hall of Fame ceremony where his mother, Rita Church, accompanied by his sister Kendra, were attending the induction to accept the invitation on his behalf. Realizing he had no time to spare, Eric borrowed the keys to his father Ken's vehicle and--with his wife Katherine and assistant Marshall Alexander in tow--they rushed in an attempt to make it to the Gem Theater in time for the dedication. While Alexander drove, Eric was busy texting his sister--unbeknownst to her or the hundreds in attendance--to see if he could arrive in time as he now had set his mind on attending and surprising the crowd.