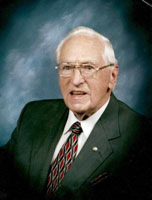 KANNAPOLIS - J. Carlyle Rutledge, former state senator, local attorney and philanthropist, died Thursday at CMC-NorthEast. He was 98. He represented Kannapolis and Cabarrus County as a community leader for more than 65 years.

“He grew with the times,” Macon said. “He came to Kannapolis in a dynamic time in the city, and he was excited about what the city would become.”

In the last few weeks of his life, Rutledge attended the UNC-Chapel Hill nutrition classes and participated intently, Macon said. He even had tickets to see the Broadway musical “Wicked” in Charlotte this week, Macon said.

“He always said, ‘Always have something to look forward to,’ ” Macon said.

Rutledge was a humanitarian who spent his wealth and resources helping others in Kannapolis, said Ed Tyson, former Kannapolis schools superintendent and longtime friend.

“He was a giant in community service,” Tyson said. “He was a rare person who saw need and addressed it.”

Rutledge was born Dec. 28, 1909, in Gaston County and graduated from Weaver College in 1930. He went on to UNC-Chapel Hill, where he received a bachelor’s degree and a law degree in 1935.

He met his wife, Judith Kuykendal, while working at Judge Henry Fisher’s law practice in Charlotte. They were married for 56 years, until she died in 1993.

Rutledge opened his practice in Kannapolis in 1936 and rose to prominence in state politics.

In his legal career, Rutledge represented Cabarrus County in the General Assembly, first in the House from 1941 to 1945, then in the Senate from 1957 to 1963. He also was president of the Cabarrus County Bar Association and served as a judge on the county’s domestic relations court.

He was a founding partner of Rutledge, Friday, Safrit & Smith and visited his office every day until he fell ill.

City Attorney Wally Safrit joined the firm in 1977. Safrit, a Kannapolis native, was practicing law in Charleston, S.C. when Rutledge contacted him.

“He called me up and asked me to consider coming back from Kannapolis,” Safrit said, “ which I certainly did.”

“We never really expected the transition of leadership from the Cannon family,” Safrit said.

The town was unincorporated at the time, but Murdock met with the community leaders over lunch, to introduce himself.

“We all went to the meeting, and Carlyle being the de facto leader, stood up and made remarks about welcoming the new leadership,” Safrit said. “He so eloquently represented the people of Kannapolis. That was one of the times I was most proud of him.”

In March 2002, the U.S. Supreme Court admitted Rutledge to its bar. Safrit said the judges in the county wanted to honor Rutledge for his service to Cabarrus County.

Reggie Smith joined the law firm in 1977, along with Safrit. He said Rutledge went out of his way to make sure his clients were treated fairly.

“He always strived to treat everyone fairly and with dignity,” Smith said. “He was a true friend and a true gentleman.”

Rutledge’s presence could be felt in every facet of Kannapolis society and business. He served as president of the Gem Theatre and started Kannapolis Real Estate Agency in 1941 with partner Cecil W. McCombs. Among the many philanthropic passions Rutledge indulged was his service to his church, Trinity United Methodist Church, the YMCA and the Kannapolis Rotary Club.

“He was our cornerstone,” said Lorna Felts, president of the Kannapolis Rotary Club. “To much of Kannapolis, he was a good friend. We are heartbroken.”

Rutledge first joined the Rotary Club in 1943 and was an active member until his death. In December 2006, he gave the Kannapolis Parks and Recreation Department $50,000 to name the new train station ride and station in Village Park after the Rotary Club.

“He was very adamant that he did not want the train named after him, but the Rotary Club,” Felts said.

The club named a service award after him, Felts said. The award honors a member who has performed outstanding community service. Rutledge endowed the award in perpetuity so the award recipient could give $1,000 to a local charity of his or her choice.

“One of the stipulations was it had to be a local charity,” Felts said.

Rutledge did many of his philanthropic activities anonymously, said Bachman Brown, first mayor of Kannapolis and longtime friend.

“It’s hard to know exactly what he did,” Brown said.

Rutledge would make his donations anonymously until the last seven years of his life, when he would bask in the attention, Macon said.

Safrit said the law office would be closed at some point in honor of Rutledge.

“He was our leader, inspiration and friend,” Safrit said.